February 19, 2013
Workers Approve Agreement Securing Wage Increases, Stronger Job Protection (Washington) – Teamster members at Costco have voted overwhelmingly in favor of a new three-year contract that includes a 9 percent wage increase over the term of the agreement, stronger job protections and an improved grievance procedure for the 15,000 workers. Costco Teamsters, who are the highest-paid retail employees in the country with the best benefits, voted 77 percent in favor of the new contract. The agreement, which was reached on Jan. 31 and approved by workers today, covers Costco workers at 55 locations in California, New York, Maryland and Virginia. “Costco employees have won a solid contract that retains and improves the high industry standards they enjoy thanks to Teamster representation at the bargaining table,” said Teamsters General President Jim Hoffa. “The workers know that Costco’s success in the industry wouldn’t be what it is without its highly-skilled union workforce. This contract ensures the employees will continue to share in the company’s success.” The annual pay increases over the three years of the contract will bring the hourly wage rate for clerks to $22.87. Additionally, clerks will receive bonuses of $3,750 to $4,000 every six months. Improved seniority rights will protect workers within their job classification and guarantee increased pay for transfers to higher-ranking positions. The new contract also gives employees improved grievance and disciplinary protections. “Costco Teamsters are the backbone of this retailer’s strength and success,” said Rome Aloise, Teamsters International Vice President who led negotiations with the company. “This contract acknowledges the high quality of work that Teamsters bring to this company. It’s a big win for the workers. We are proud of the members and the bargaining committee for negotiating and ratifying another industry-leading contract. With this new agreement, Costco workers’ average pay is more than 42 percent higher than its rival, Sam’s Club, which is owned by Walmart. The strong wages and benefits of Costco’s Teamster workforce results in low turnover and higher-skilled employees at the company. Teamsters at Costco are part of the Teamsters Warehouse Division, which represents more than 250,000 employees at retailers and in warehouse facilities across the country. Founded in 1903, the International Brotherhood of Teamsters represents 1.4 million hardworking men and women throughout the United States, Canada and Puerto Rico. Visit www.teamster.org for more information. Follow us on Twitter @Teamsters and “like” us on Facebook at www.facebook.com/teamsters.
Posted by irudedog at 13:54 No comments:

congratulations to the drivers at Reddaway in Fontana Ca. For voting for Teamsters representation 102 out of 150!

It's time for you FedEx employees to stand up and be counted! 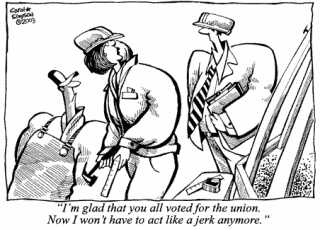 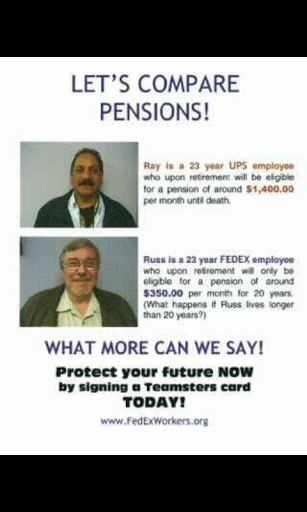 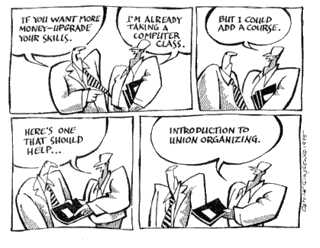 Posted by irudedog at 18:09 No comments:

Organizing on the Edge of being Fired | Jobs With Justice

Posted by irudedog at 13:20 No comments:

It's funny when you think about it , that Fred Smith would be a member of this group. He wants us to work until 70 years of age to retire. Yet high ranking management have told drivers that FedEx doesn't want older workers at this company.

Then when you do work over 30 years with the company your pension max out at that. And whatever years over you work it does not increase your pension when you retire ,it stays at the 30 year amount.

I hope this wakes you up FedEx employees , it's a crying shame.

Posted by irudedog at 13:19 No comments: