Update: Andrew Puzder has withdrawn his nomination for labor secretary.
Andrew Puzder, President Trump’s pick for labor secretary, is expected to withdraw his name from the nomination, a source close to the restaurant executive tells CBS News’ Major Garrett.
The source says he does not believe Puzder will appear for his confirmation hearing Thursday before the Senate’s Health, Education, Labor, and Pensions (HELP) committee.

Sponsor content from Microsoft
Machines dictating your schedule?
Asked why, the source said, “I think he’s very tired of the abuse.”
Another source working on Puzder’s confirmation preparation also told Garrett that the odds were about 80 percent that the CKE Restaurants executive would pull out of the nomination.
The news comes after days of intense scrutiny over Puzder’s fitness to lead the Labor Department and questionable support from Republican senators.
Puzder, who previously led the company that owns fast food chains Carl’s Jr. and Hardee’s, came under fire earlier this month after reports that he and his wife had employed an undocumented immigrant for housework.
And Puzder’s past has also come under the microscope in recent days. Earlier this week, Politico unearthed a 1990 episode of “The Oprah Winfrey Show” where Puzder’s ex-wife, Lisa Fierstein, accused him of domestic abuse. Puzder has repeatedly denied the allegations and Fierstein recanted her accounts of abuse shortly after the episode aired.
Senior Senate GOP sources who were confident of Puzder’s nomination on Monday told Garrett they were now dialing back optimism, saying that there are serious “rumblings” about Republicans not backing Puzder and a very high probability Puzder will withdraw.
At least five Republicans in the Senate have not made public how they’ll vote on Puzder, CBS News’ John Nolen reports. Sens. Susan Collins of Maine, Johnny Isakson of Georgia, Lisa Murkowski of Alaska, Mike Enzi of Wyoming and Tim Scott of South Carolina -- all members of the Senate HELP committee -- have declined to state how they plan to vote until after Puzder’s hearing. (Most of the senators have indicated they don’t typically comment with their vote ahead of hearings.)
The White House declined to comment on the status of Puzder’s nomination.
Posted by irudedog at 22:17 No comments:

A National Right to Work bill has been introduced in the House. This legislation, H.R. 785, will have real consequences for working men and women across the country. Right to Work laws drive down wages and decrease workplace safety. We urge you to reach out to your members of Congress and tell them that they should oppose H.R. 785 and any other attempts to weaken collective bargaining rights.
Posted by irudedog at 07:47 No comments: 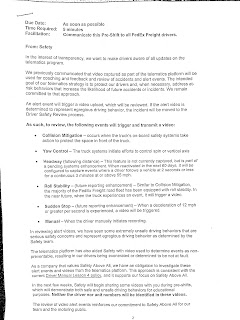 ITS BACK... Meetings at CGT this morning with the local drivers and this Monday with the Linehaul drivers. They were informed that if you have an event with the camera system they (safety) will determine if it is a safety issue you will have to go before a driver review committee where you will be judged not only on your event but they will take into consideration everything since your first day of employment. They say it's not a scorecard but what would you call it? Didn't they say we wouldn't be disciplined and only coached by the system. Well surprise surprise they are changing that stance. They LIED. Meetings will be held over the next few weeks to let everyone know. We don't even have cameras or eld's in our trucks in CLT. They have to negotiate how ours are used....