US unions. FedEx mounts big-money push to head off unionization by US workers

FedEx workers hoping to unionize and get better pay and benefits have met with a well-financed barrage of opposition from the company, according to recordings obtained by the Guardian.

Workers who charge that their benefits are less than at rival UPS said the company has bombarded them with anti-union messages and forced them to attend anti-union meetings.

The Guardian obtained recordings of meetings that were mandatory and required workers to sign in, according to a FedEx employee, held at FedEx facilities in 2015 and 2016, where managers and union avoidance consultants lectured workers on unions as the Teamsters was attempting to organize FedEx drivers at several locations around the United States.

“It’s time to campaign. If you don’t want this third party coming in putting a wall between us, it’s time. Because when you campaign and tell them you don’t want them here, eventually it becomes loud and clear to them. You can do that,” said a FedEx human resources manager in a July 2016 captive audience meeting.
In the meetings, FedEx human resources managers often cited anecdotes to dismiss union organizing.

One, in the same July 2016 meeting, said: “Recently I had this question come up from an employee. Why is there a small group of employees at our company who seem to be very ungrateful at what the company has to offer them? Why do some employees give their allegiance to strangers and an organization like the Teamsters rather than this company that continues to provide for us, that has provided us with a long list of benefits and incredible pay, not to mention good equipment and facilities?
“I don’t have an answer, I don’t know. I feel your pain. I appreciate the company and what they offer. I have an attitude of gratitude.”

In another alleged anecdote, the same FedEx manager told workers a story about an unnamed 58-year-old employee for three years who supported unionizing because they wanted a better pension plan.

The manager told workers: “He’s getting closer to retirement. He tells the HR manager. The manager said: what have you done leading up in your career to prepare for retirement? You can’t hold FedEx Freight accountable for your own inability and failure to prepare for your retirement. He changed his whole attitude about it and started supporting the company because he took ownership of his own failure.”
In the meetings, FedEx managers and consultants claimed negotiations with labor unions are a gamble.
“It’s like going to Vegas and rolling the dice,” one said.
They also referred to union authorization cards as a “blank check”, and told workers “they need money, they’re running out of money. They want your money. They want our money.”

In a video used by FedEx to deter unionization, the Teamsters union was characterized as a plot to undermine FedEx by UPS, where about 250,000 employees are represented by the Teamsters.
“A package lost by FedEx equals a package gained by UPS,” said a narrator in the video.

FedEx’s anti-union campaign between 2014 to 2018 was largely a success. In April 2019, the only FedEx Freight workers unionized in the US voted against an effort to decertify the Teamsters union at a warehouse in Stockton, California, but prior decertification efforts were successful in 2017 in Pennsylvania and North Carolina. The only other unionized FedEx employees are their pilots, who voted to form a union in 1993.
A FedEx location in New Jersey voted to unionize in 2014, only to voluntarily cede representation in 2017 after FedEx fought in court with the National Labor Relations Board (NLRB) for years over which workers should be included in the bargaining unit. Several FedEx warehouses around the US voted against unionizing between 2014 and 2018, while other locations didn’t get that far in the union organizing process due to company pushback.

“They told me, ‘either you’re a team player, or you’re a problem and we will do everything to eliminate problems,’” said Greg Barfuss, a FedEx driver for seven years who was laid off in December 2015 after openly supporting unionization of his Gardena, California, based FedEx warehouse. “They first tried to intimidate me. When that didn’t work they fired me, and that scared other drivers from trying any more.”
He filed unfair labor practice charges with the NLRB, and a settlement was reached with FedEx in May 2016 for one of the charges.
FedEx rejected Barfuss’s claim that he was fired for union organizing and noted the NLRB did not rule in favor of Barfuss on the charge of being fired in retaliation for union activity. “To avoid the time and expense of litigation, FedEx Freight chose to resolve one of the claims and did so without payment of money or admission of liability,” a spokesperson for FedEx told the Guardian in an email.

As FedEx heavily opposed
unionization efforts among its employees, the company aggressively lobbied in favor of the 2017 Trump tax cut bill, which decreased FedEx’s taxes from over $1.5bn in 2017 to zero in 2018. Despite the significant tax savings, the New York Times reported in November 2019 that FedEx did not fulfill promises of using the tax windfall to reinvest in equipment and other assets, while spending about $3.6bn on stock buybacks in 2018 and 2019. FedEx’s CEO, Fred Smith, claimed the story was “distorted”, without citing specific examples, and challenged the New York Times publisher to a debate in response.

Workers at FedEx experienced cuts to bonuses in 2019 and a FedEx driver in Texas, who requested to remain anonymous for fear of retaliation, said this year workers essentially received a pay cut due to increases in healthcare costs.
“They decided for 2020 that if your spouse can get insurance at their employer and you keep them with Fedex’s insurer, they’re going to charge you $150 a month to keep your spouse on it. The pay raise amounted to $30 a week because we received $0.75 an hour raise so it doesn’t cover the spousal surcharge,” they said.
FedEx is also changing its pension plan in 2020, eliminating it for new hires who will be offered a 401k plan instead, while giving current employees the choice to keep their current plans or opt in to the 401k.

The FedEx driver explained the pension plan was one of the driving forces for union organizing at FedEx.
He said: “Our retirement is bad when you compare it to UPS. A UPS worker gets $100 a month for every year of service, somewhere around there. So 20 years in you’ll get a $2,000-per-month pension. I have 20 years here. If you project my pension, in another 10 years my projected income will be $300 a month with almost 30 years in. What am I going to do with $300 a month?”


A FedEx spokesperson said the company was changing retirement benefits program to ensure the benefits “remain competitive”.
The spokesperson added in an email to the Guardian: “While FedEx Freight respects the right of our team members to decide for themselves if they want to be part of a union, the law does not require us to remain neutral and protects our right to provide facts and opinions about unions so that our employees may make a fully informed decision
Posted by irudedog at 18:37 No comments:

The NRLB forced XPO to post this notice to announce that XPO has been lying about their employees right to organize. And that the company violated , the same way FedEx Freight did during our campaign, just about everything to intimidate and coerce their employees.
Keep up the good work! My brother's and sister's!
Rudy 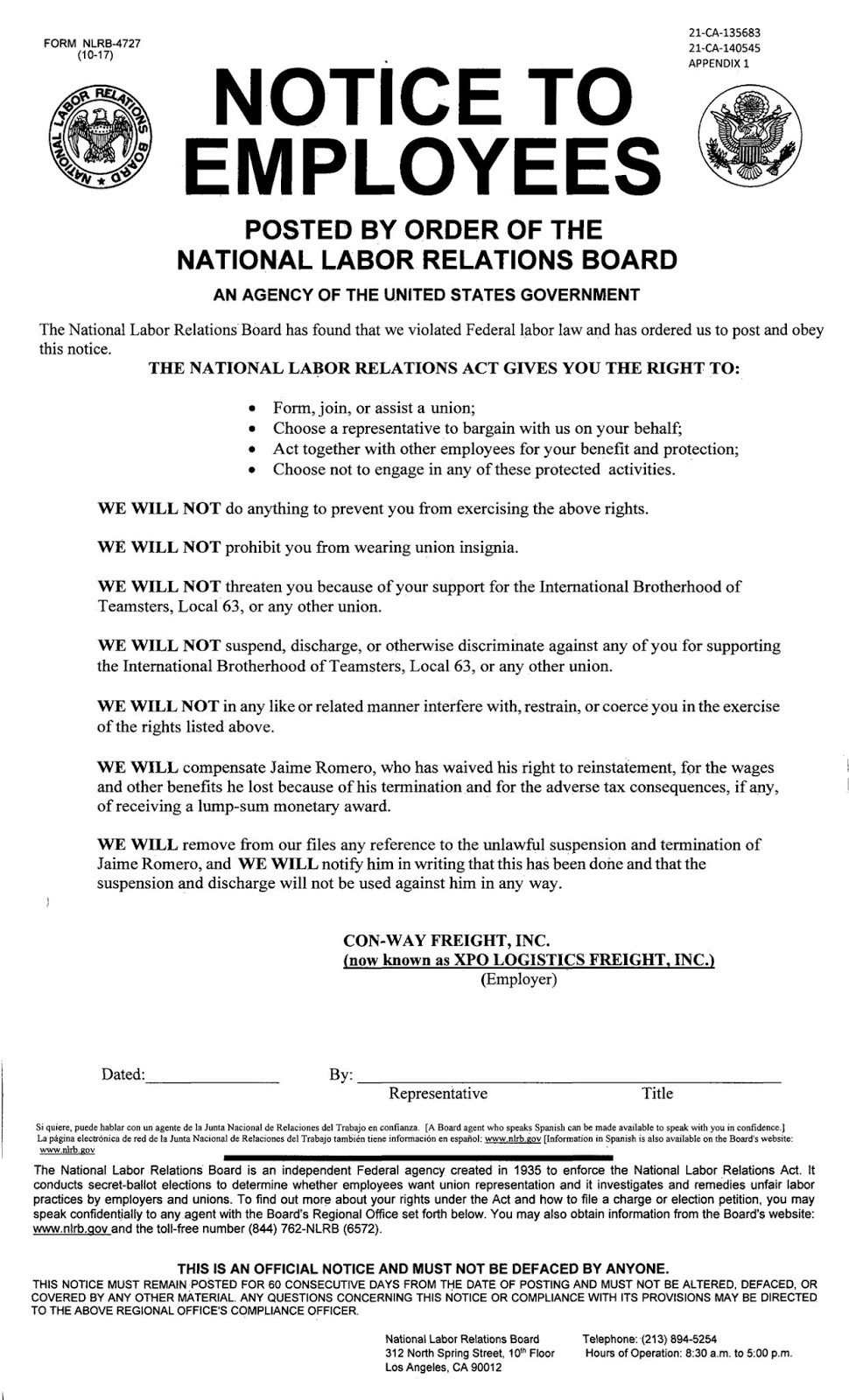 Posted by irudedog at 10:44 No comments:

KNOW YOUR RIGHTS AT WORK

KNOW YOUR RIGHTS AT WORK

Learn about the federal and state laws which protect you and fellow workers, union and nonunion alike. Taught by workers’ rights expert Joe Paller, this two-Saturday course covers family, medical and other leave rights, disability benefits, racial and gender discrimination, breaks and more.
The class will give special attention to NEW AND RECENT CALIFORNIA LAWS protecting employees in the workplace. Specially designed to help union reps and employees enforce the law, often without a lawyer.

TOPICS INCLUDE:
• Privacy Rights and Employer Snooping
• What an Employer Can't Ask You at Work or When You Apply for a Job
• Suing for Wrongful Discharge • Paid and Unpaid Leaves of Absence for Sickness, Pregnancy or Disability
• Email and Social Media Rights at Work
• Drug and Alcohol Testing
• Workplace Rights of Undocumented Workers
• Rights to Inspect Your Personnel and Payroll Files

ASO Membership Fee: $10 per semester (optional but must opt out)
Health Center: $11 per semester Checks Payable to LATTC

Instructor: Joe Paller Gilbert and Sackman
Joe Paller is a principal at Gilbert & Sackman where he represents labor unions and union benefit plans, as well as plaintiffs in class action litigation.

Mr. Paller was named the “2020 Lawyer of the Year” in the great- er Los Angeles area in the field of “Labor Law - Union.” He has been recognized as a Southern California Su- per Lawyer for 20 consecutive years. Joe is one of a handful of lawyers in North America who has been inducted as a Fellow of the American College of Employee Benefits Counsel and as a Fellow of the College of La- bor and Employment Lawyers.

I have taken these classes during our last campaign to organize FedEx Freight in Southern California.

Anyone who work for a nonunion company should take these classes. Especially if you work for any division of FedEx. 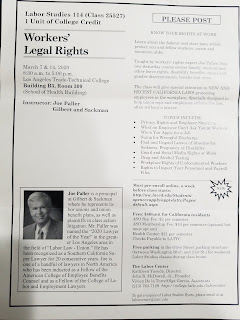 Posted by irudedog at 18:44 No comments: