Today, there have been reports from the Los Angeles FedEx Freight terminal that management forced workers to view an anti-union video.  That's not very different from their practice over the past number of years.

But at the end of the video they distributed a 19 item questionnaire about the workers' attitudes about the union and required workers to fill it out and sign it.  It's hard to believe FedEx could be so brazen about this interrogation, a likely violation of worker rights that are protected in section 8(a)(1) of the NLRA.  Check out
http://www.nlrb.gov/shared_files/Board%20Decisions/352/F35239.pdf for a recent case that describes a case where the employer was cited for asking a worker a simple question about who attended a union meeting.

Here's one suggestion:  even though it's illegal for the company to ask, and it's none of the company's business about what you think of the union, now isn't the time to alert management about your support.  Fly under the radar screen and just answer as if you think unions are the worst thing that ever happened to this country.  The time to stand up publicly will come soon

United we stand.
I am one of the most optimistic workers in FedEx. But, I am beginning to wonder where we stand. I realize Fred Smith it trying to manipulate the U.S Congress with his threats of purchasing aircraft from Europe (France) instead of the United States. To purchase those aircraft from the French, where labor unions are that Nation’s norm; simply means that Mr. Smith only wants to sh-t on American labor. This wealthy segment of America hates the very foundation that helped build its fortunes.
This is sociopathic greed; you simply want reap the rewards and rather than extending some rewards to the American workers who are the foundation of your enterprise, you would rather give it to the French who more heavily unionized than any American company. I don’t understand this level of selfishness.
A market economy flourishes when goods and services are delivered; revenues are earned and a percentage of the profits are distributed amongst the labor force that helped create those revenues. Those dollars would be redistributed back into our economy in a price system set by supply and demand.
The West Virginia disaster a few months ago killed 29 miners and has been blamed on chronic safety and maintenance violations by the mine’s owners, which have been accused of calculating that it was more cost-effective to fight citations and even eventually pay fines than to immediately correct unsafe conditions.
Now we have that horrible oil spill in the Gulf of Mexico that will threaten the livelihood of Fisherman and many other industries in that region. These are high level corporate decisions where greed is the foundation which may eventually destroy our way of life if continued unchecked.
As FedEx workers our little piece of this pie is a union contract which will guarantee safe working conditions, job classifications, a grievance process, and a livable pension plan for our retirement.
It is time to get this ball rolling; the continued political, economic, and industrial news we receive every day is a constant remainder of our need to take immediate action. The time is now!
Posted by irudedog at 07:45 3 comments:

FedEx Corp. Chief Executive Officer Fred Smith is misleading the public on air-safety legislation and “bought his way” to be covered by a 1996 labor law that helped his company, a House committee chairman said.

U.S. Representative James Oberstar, a Minnesota Democrat and chairman of the House Transportation and Infrastructure Committee, rejected Smith’s characterization that a labor measure the chairman wrote is holding up aviation-safety legislation.

Smith is “peddling a false image” of the bill’s status, Oberstar told reporters today on a conference call after meeting relatives of victims in a Colgan Air crash who are pushing for action on the measure. “He ought to be telling the truth rather than misleading the public.”

FedEx, the second-largest U.S. package-shipping company, is fighting United Parcel Service Inc. and unions over Oberstar’s legislation that would treat FedEx workers on the ground the same as similar UPS employees in labor organizing. UPS is covered by a law that lets workers vote locally to join unions. 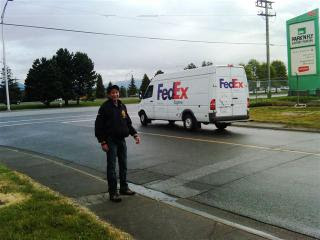 Posted by irudedog at 13:58 No comments:

Should you be approached by FedEx union-buster

First Corporate shows you an anti-union video on how the union will invade your life and that the union will be after your union dues. Then Corporate started slashing full time dockworkers into part time workers and taking their full benefits away, and still Corporate has the nerves to tell you we don't need the union. Next Corporate started slashing our Line drivers, and putting them into our docks while the junior drivers runs the prime runs, and also slapping our line drivers in the face by allowing outside scab carriers taking their work away, and Corporate stills tells you line drivers we don't need a union!. Now Corporate invades your home by sending you a post card and telling you folks that the unions are unnecessary at FedEx Freight and FedEx national LTL. Let me tell you something FedEx Corporate you have invaded our homes and have created animosity and confliction between family members who are in unions. Some of us are spouses of union jobs, or our fathers and mothers are members of unions and also brothers and sisters are members of unions. Corporate how do you think family members feel about FedEx now when you come into our home and insult them? Some of these members of unions put food on your tables because you haul their freight, way to go Corporate.

Q: What About Union Dues?

Q: What About Union Dues?

Union dues are 2.5 times our base rate of pay (base pay rate excludes all premium pay) once a month. For example, if a member’s base rate of pay is $28.13 (base rate for a Sr. AMT), his monthly dues rate will be 2.5 of that or $70.32 per month. We do not pay any dues until the first contract is ratified and there is no initiation fee or any other fees or assessments. The Teamsters is 100% funded by members—the Union accepts no money from outside sources in order to protect its integrity and independence. Union dues go directly to paying for the costs of running the union and representing members.
Posted by irudedog at 07:13 No comments:

" Your union is proud that it is made up of men and women who have the gumption to fight against injustice at a time when it seems to have become very unpopular to fight. Those who control the nation's money, and with it segments of the political world and the press, have done a slick propaganda job against the working man's right to fight for a better way of life."

I have received some information from our friends in Canada that there is some interest in organizing FedEx in Australia. Now some will say " what does this have to do with us?" It has no direct effect on us, but this shows us that what ever problems we have here in the states, may not just be here. If other employees from around the globe see a need for a Union in their work place, we must be heading in the right direction.

Time for us here in the United States to show our fellow employees from around the world, that we are brave enough to organize FedEx here!

David Binks walks away during question period | Stronger Together