Letter to Employees from their Employer After NRLB Court Decision 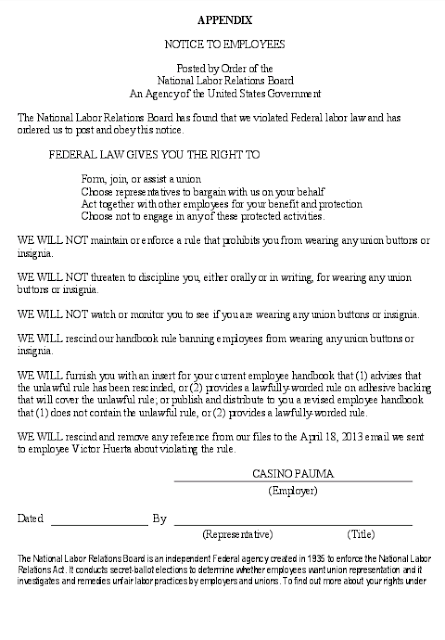 Posted by irudedog at 21:10 No comments:

No Good News from the US Supreme Courts

(COMMERCE, Calif.) - On Sunday, line haul drivers ratified the first-ever Teamster contract at OnTrac, the largest regional package delivery company in America. The drivers are members of Teamsters Local Union 63 in Covina, Calif. and had been negotiating a first contract for more than a year.

The OnTrac line haul drivers in Commerce approved a contract with:

Protections against unfair discipline; Guaranteed raises every year during the life of the 3-year contract; Union healthcare plan that covers 100 percent of most major medical expenses and includes dental and vision coverage; Paid sick days; Increased vacation time for long-term employees; Protections against subcontracting out the drivers’ work; And improved safety regulations.

“We are happy that these workers will finally have the job protections that they deserve,” said Randy Korgan, Organizing Director of Teamsters Joint Council 42. “OnTrac built its business by outsourcing as much work as possible, and using as many temporary and misclassified employees as possible. We all know that’s a recipe for disaster for workers and their families.”

In February 2014, OnTrac terminated all its line haul drivers in Southern California who did not have union representation, and told them to attempt to find work with OnTrac’s subcontractors. The drivers who had voted for union representation with Teamster Local 63 were protected, however.

“We organized with the Teamsters a year and a half ago to improve our wages, get better healthcare and protect our jobs,” said Eddie Spears, a two-and-a-half-year OnTrac employee who was elected by his coworkers to serve on the union’s bargaining team. “We’ve now got a solid base to build on. Now we have jobs with a future.”

OnTrac’s business model results in substandard wages and working conditions compared to industry competitors. OnTrac delivers to customers via several small contractors who in turn subcontract to couriers who are treated as independent contractors. Couriers are generally responsible for all business costs such as maintenance of vehicles and other equipment. After expenses, couriers often make less than minimum wage.

OnTrac is a privately held company with venture capital from Court Square Capital Partners. OnTrac operates as a subsidiary of Express Messenger Systems, Inc. In 2012, OnTrac earned $286.9 million in revenues and $4.8 million in profits.

Founded in 1903, the International Brotherhood of Teamsters represents more than 1.4 million hardworking men and women in the United States, Canada and Puerto Rico. Visit www.teamster.org for more information. Follow us on Twitter @TeamsterPower.