FedEx thanks Congress and Trump for tax reform

“We applaud Congress for passage of the Tax Cuts and Jobs Act and thank the president for signing this legislation, which will modernize the U.S. tax code and increase America’s competitiveness. FedEx has long supported tax reform efforts which offer pro-growth, pro-business solutions that will power the economy, increase business investment and expand job opportunities.”

FedEx and Fred Smith, the company’s founder, chairman and CEO, have remained vocal on tax reform — especially over the past year.
In June, Bloomberg reported Smith had pushed an alternative tax plan. When asked about those efforts, FedEx provided a statement to the Memphis Business Journal from Robert Brown, corporate vice president of Tax for FedEx Corp., that said, “We are actively discussing various tax reform alternatives with key stakeholders to fix our broken tax code with a focus on growing GDP and investment for the country.”
Smith then joined forces with David Abney, chairman and CEO of Atlanta-based UPS to author an August op-ed in the Wall Street Journal, “Business Rivals Agree on Policy.” The piece touched on a variety of topics including the simplification of taxes.

And in November, FedEx “applauded” the U.S. House of Representatives and the Senate Finance Committee for the passage of the tax legislation and encouraged Congress to deliver the final votes.
During FedEx’s Dec. 19 second quarter 2018 earnings call — just prior to the official passage of the tax reform — Alan Graf, executive vice president and chief financial officer for FedEx Corp., said any capital acceleration would primarily be allocated for equipment, technology and pension funds and would grow earnings per share.
FedEx has more than 400,000 employees, averages 13 million shipments per business day — except for the peak holiday shipping season — and connects more than 220 countries and territories. In fiscal 2017, FedEx reported $60.3 billion in annual revenue.
Posted by irudedog at 08:18 No comments:

A delivery truck stands in front of a FedEx Corp. shipping center in Miami. Scott McIntyre/Bloomberg News
FedEx Corp.’s delivery truck is heading in the right direction, but the turbo-charge from Uncle Sam won’t hurt. The $65 billion company reported earnings after the close of trading on Dec. 20, besting analysts’ quarterly estimates and raising its full-year outlook.
FedEx is now targeting $11.45 to $12.05 in fiscal 2018 adjusted earnings per share, up from $11.05 to $11.85 previously. That range rises to $12.70 to $13.30 if you adjust it further to exclude the integration costs from its purchase of Netherlands-based TNT Express last year (more on that later).
RELATED: FedEx profits grow 11% in fiscal 2Q, beating Wall Street forecasts
Intriguingly, FedEx also gave a third guidance range that reflects the effect of the tax cut Republicans are trying to pass.
It’s one of the few companies I’ve seen try to parse the legislation’s earnings impact, and the benefits are major: the tax bill would add an estimated $4.40 to $5.50 to FedEx’s fiscal 2018 adjusted EPS. To put that in context, that’s an extra $1.3 billion in earnings at the midpoint of the range, based on the company’s shares outstanding as calculated by Bloomberg News.
RELATED: FedEx and UPS surge as investors pick winners from tax overhaul
That FedEx of all companies would start running the numbers before the tax bill has even become law isn’t surprising. CEO Fred Smith is a major fundraiser for Republicans and earlier this year was pitching his own version of tax reform.
The biggest reason for the 2018 boost is the revaluation of net deferred tax liabilities, according to the company. FedEx, which gets the vast majority of its revenue from the U.S. even after the TNT deal, paid an effective tax rate of 34.6% in 2017 and had been expecting a levy of between 32% and 35% for 2018, per its annual filing.
The latest version of the tax bill targets a corporate rate of just 21%. The earnings boost comes as FedEx also gets a better handle on the surge of e-commerce shipments that have flooded its network over the past few years. Home deliveries are less profitable for the company than corporate drop-offs because drivers have to make multiple stops and take more circuitous routes. FedEx has invested heavily in building out its network, and those efforts are paying off.
Adjusted for TNT integration expenses, FedEx increased operating margins in each of its main divisions: Express, Ground and Freight. That hasn’t happened for quite a while.
The true test will come when FedEx reports its third-quarter 2018 results in the spring. That period will encompass the bulk of the all-important holiday season, but the company’s latest earnings should give investors more confidence that it will avoid the missteps of its past, perhaps better than rival UPS Inc.
It might have been a total slam dunk of an earnings report — if not for those darn TNT integration expenses.
That business was the victim of a cyberattack earlier this year, forcing FedEx to accelerate its transition to the parent company’s information technology and operational infrastructure. FedEx now expects $1.4 billion of integration expenses through fiscal 2020, up from $800 million.
About $450 million of that bill will hit during its fiscal 2018. That likely won’t be enough to overshadow the rest of FedEx’s good news, but it’s just another headache for a deal that has already delivered plenty of them.
FedEx ranks No. 2 and UPS No. 1 on the Transport Topics Top 100 list of the largest North American for-hire carriers.
Posted by irudedog at 07:00 No comments:

AUXVASSE - After about a month of conversations, the Dollar General store workers in Auxvasse won a vote to unionize Friday night.
It took less than five minutes to tally the votes, six "yes" and four "no,"making the Auxvasse location the first Dollar General store in the country to unionize.
Adam Price is one employee who voted to join the union.
“You know, we all love working here and it’s a fun place to work, we enjoy the customers and we like Dollar General," Price said. "It’s just that we haven’t really had a voice at the company and we think the company can do better for us and for itself."
Dollar General released the following statement: “We are very disappointed in the vote and continue to believe that a union is not in our employees' best interests. In the coming days, we will evaluate next steps.”
The workers will be part of the United Food and Commercial Workers Local 655.
The union's director of organizing, Billy Myers, attended the vote.
“UFCW Local 655 believes, if an employee wants to better themselves, and their coworkers, and reach for the middle class status, we should help.”
He noted many employees shared Price's opinion, that the company is a good place to work, but could improve.
"After all, we go to work to make a living wage," Myers said. "People need to stand up and believe they’re worth more.”
Price said the extra pay that the union brings wasn't "specifically what we’re going after.”
“It’s just, just in general to be able to have our voices heard, really, so that we can have a more consistent and fair and competitive pay and environment to work in,” he said
Posted by irudedog at 19:01 No comments:

Posted by irudedog at 22:07 No comments: 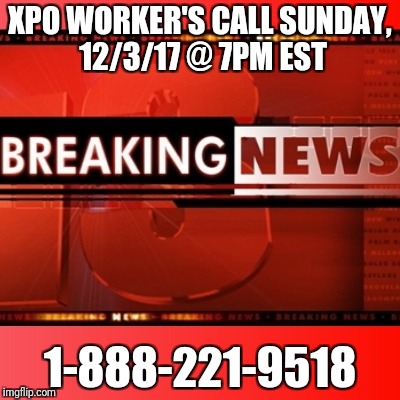 Posted by irudedog at 16:36 No comments: