As for the Change to Win website, no one on this blog had anything to do with deleting your comments. Second you should be thanking a few drivers at the fontana service center for getting the top of scale brought up to Whittier & OC's rate. A year ago around this time HR & upper management were saying it would be at least 3 to 3 1/2years before they would consider bringing up the top of scale. After three weeks of meetings with HR & Regional managers, who admitted that it was "bad management" not the union that broke CF. (I wonder what they were fishing for?) Two weeks later every dockworker, every line driver, every hourly office personnel, every hostler, every part time worker, every p & d driver's got a raise or could look forward to a higher pay scale, because of a group of p & d drivers who united together to get this done. With no Thank You from anyone of the dept's mentioned above!
That's funny that the mention of union at this service center can "Change Everyone to Win".From 3 years to less than 2 months!And a year later, now your pension is getting a face lift now.I say a face lift because that's all it is. Just a little tweaking to hide what they should really be giving you.
So instead of putting your "HELL NO" sign up Larry, you should say "Thank You" to Joe Nuno and his commettee's here and at other service centers around the So. Cal. basin for getting you a well deserved raise!

Be Wise And Organize ! 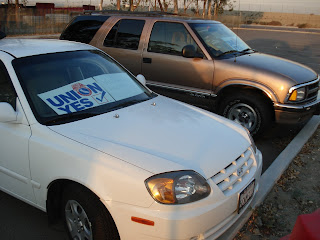 Now that the Fontana FedEx service center has found their spokesperson in Larry the hostler,( he says he's doing this on his own?).The Change to Win blogs can be access on the computers in the break room again, after being blocked for a few weeks. Proving once again that upper management here only wants you to read what they want you to read. Doing whatever it takes to keep you from learning the truth about the positive benefits in becoming a Teamster company.

For more information, contact your union committee at your local service center or find a local Teamster union in your area. Or hit the hyper links to the right.