Hi everyone,
I thank you for the opportunity to adress some things that are being told to you that frankly aren't true or
are based loosely on the truth. Yes, there are several things that have been tentavely agreed to but we have MUCH
more to go through. Wage scale and medical benefits were only agreed to UNTIL WE HAVE A CONTRACT. At that point
our pay and medical benefits will be what is in the contract. You have been led to believe that we have agreed to
the same medical benefits and pay while we will be under contract which frankly, is NOT TRUE. The statement whether
we are Teamsters or not in those two centers is a false statement because we have elected the Teamsters as our
legal bargaining agent. So in this case, ALL DRIVERS will be represented by the Teamsters and enjoy the benefits
of a contract and representation from our Teamsters local.
As far as the statement made that "the only other big compensation item left to negotiate is retirement/pension
benefits....", that also is false and quite misleading. Here are several items that have to be negotiated:
1. Seniority.
We are going to negotiate and set seniority for both the city and road. No more holding runs for their favorites
and city routes should be bid by seniority, not just a start time.
2. Electronic surveilance
We don't think the electronic log/camera system should be used to discipline drivers. We also don't think there
should ever be a camera on the driver. We are professionals and as such should be treated so... how would managers
like a camera looking at their activities all day? Hint- they wouldn't like it.
3. Disability
The current short/long term disability doesn't offer enough time nor does it offer the job protections that it
should. They have made it clear we have been given more than what is minimally necessary. That is not good enough
and as the largest LTL in the country we earn better.
4. Medical Insurance
We already know we can get better insurance through the Teamsters. Our medical insurance has skyrocketed since
2007 and could be much better. Blaming the raises on the ACA is just plain false. Self insured companies have complete
control over deductibles, out of pocket maximums, coverage percentage and the actual cost to the employee. To say
it has happened due to anything but them choosing to make it so is just frankly not true. We can do MUCH better and
we will show people just how much better soon enough. But by comparison our pilots who are union negotiated an
insurance which is far superior to ours and the company agreed to it. Their buy-up medical plan offers ZERO
deductible with 100 PERCENT COVERAGE. Thats a FACT.
5. Retirement
This also has to be negotiated. Despite the fact the company chooses to talk about the central states penion fund
we will NOT be a part of this fund. We have many choices here but just remember we can actually have an opportunity
to negotiate what we will have, in other words, we will have a VOICE.
6. Job Security
The basic right to have representation at the workplace is very important to us. Gone will be company "policy"
and we will have a contract that not only we have to abide by, but so will management! A contract that we all will
have access to and one that cannot be changed on a whim. As soon as our election was certified we had the legal
right to union representation. Gone are the days where management could team up on a driver. We are no longer
at-will employees who can be terminated for any reason. You will have Weingarten rights for representation even
without a contract! Jobs have already been saved by this.
This all comes down to some simple questions:
1. Has your job security increased over the years?
2. Has your retirement gotten better over the years?
3. Has your medical insurance for you and your family gotten any better?
It is my opinion that NONE of these things will EVER happen if we choose to depend on the good will of a
corporation. All three of the above questions have been a resounding NO in my opinion. The ONLY way we can get better
for ourselves and better for our families is to form OUR union and work to get a contract that insures that our voice
is heard loud and clear. In my opinion YOU matter, YOUR FAMILIES matter and we frankly EARN better.

Posted by irudedog at 07:56 No comments: 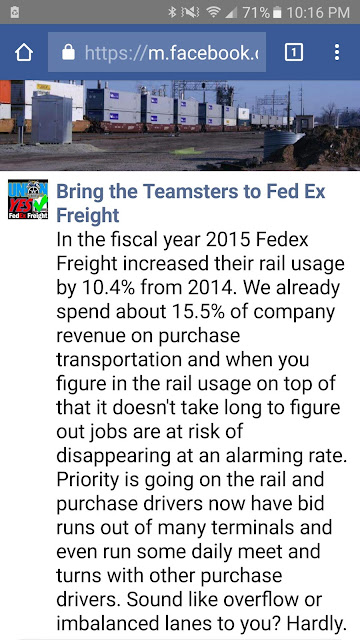 Posted by irudedog at 22:19 No comments: