By Luke Stangel Contributing writer
Mar 27, 2018, 6:16am PDT Updated Mar 27, 2018, 7:10am
Shipping giant FedEx Corp. this week agreed to buy 20 TeslaSemis, becoming the latest major corporation to place a preorder for the all-electric delivery truck.
Tesla's Semi trucks cost $190,000 to $257,000 each, depending on features, meaning the FedEx deal is likely worth between $3.8 million and $5.1 million.
“FedEx has a long history of innovation and incorporating sustainability efforts throughout its global network,” FedEx Freight CEO Mike Ducker said in a statement. “Our investment in these trucks is part of our commitment to improving road safety while also reducing our environmental impact.”
FedEx Freight focuses on less-than-truckload freight shipping. In 2016, FedEx deployed a little over 1,800 electric trucks worldwide, as part of a global fleet of some 2,700 alternative fuel vehicles.
The Tesla Semi isn’t scheduled to go into production until 2019. Early prototypes have been spotted in Silicon Valley and on Interstate 80, between Tesla’s battery factory in Reno and its car plant in Fremont. It’s about 260 miles between the two factories, up and and over the Sierras.
Tesla CEO Elon Musk unveiled the Semi in mid-November, promising that the truck’s batteries would have a 500-mile range before they needed to be recharged. Early customers will likely need to install high-capacity battery charging stations at their distribution facilities. Eventually, Tesla plans to build new “Megacharger” stations capable of charging a Semi up to a 400-mile range in 30 minutes.
Tesla hasn’t said how many Semi trucks it’s sold yet. Based on press releases from major companies like FedEx, Tesla has likely pre-sold well over 350 Semis to date.
Shortly after the truck was unveiled, UPS bought 125 trucks, Pepsi bought 100 trucks, Anheuser-Busch bought 40 trucks and Canadian grocery store chain Loblaw bought 25 trucks.
The truck is designed around autonomous driving, with a radically redesigned cabin for driver comfort. Eventually, Tesla believes its self-driving trucks will be able to draft off one another in a convoy, improving their range.
2 OF 3  REMAINING

Posted by irudedog at 16:10 No comments:

FedEx Employees Interested in organizing or learning the importance of a Teamster contract. You are encouraged to attend. 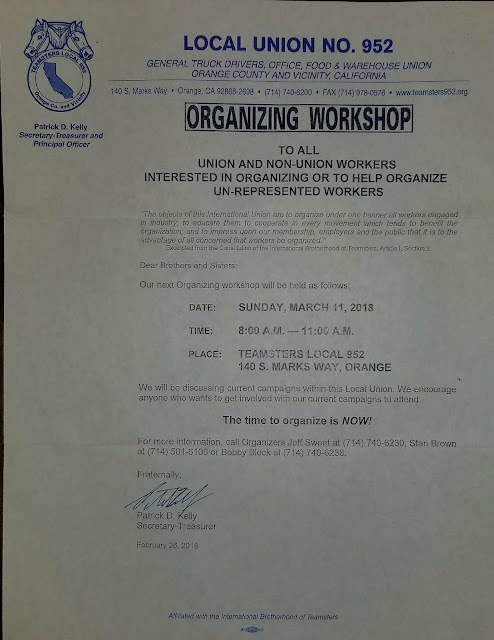 Laurence Young believes strongly in the fight to ensure collective bargaining rights for public sector workers. So strongly, in fact, that he traveled cross country from his California home so he could be at the U.S. Supreme Court Monday when the court heard “Janus v. AFSCME,” a casethat threatens to undermine unions that represent public  employees across the U.S.
The University of California at Santa Barbara library employee, who is a business agent for Local 2010 at the campus, got into the court briefly to hear Justice Elena Kagan stand up in support of unions. Outside the high court, he said he was energized by the hundreds of pro-union demonstrators who were fighting back against the corporate-fueled agenda.
“I see this case as affecting unions nationwide, not just public sector unions, so I see this as an attack on working people across the country,” Young said. “You can get a sense of that from the backers of this case, the Koch Brothers, Americans for Prosperity, all of these right-to-work groups that are funding this case. Their issue is not about the public sector or even free speech. They want to destroy unions across the country.”
He added, “This is a key moment for labor in the United States, and I wanted to be here in the nation’s capital to hear it argued in the Supreme Court.”
But that’s not all he did as part of his trip. He also joined scores of fellow Teamsters and many others at the D.C. rally for the “Working People’s Day of Action,” part of a nationwide gatheringwhere workers came together to stick up for union power on the job. He said the event offered an opportunity to connect with his fellow union members.
“It was a tremendous moment, a great group of folks came out,” Young said. “We had some terrific speakers there. But more important than that was the chance to stand shoulder-to-shoulder with my union sisters and brothers from across the nation.”
The Teamsters are standing up against Janus because union jobs pave the way to a middle-class lifestyle. The median union worker makes more than $200 more a week than non-union workers. That's why the Teamsters stressed the need for more union jobs in its “Let's Get America Working” campaign that debuted in 2015. Workers earning more don’t just help their families; they help the economy at large as well because they spend more.
Though the Supreme Court Justices will ultimately have the final say in the Janusdecision, the Teamsters and working people across the country can be proactive by speaking about the benefits of a union, increasing membership and remaining unified. That way, over-compensated corporate executives who want total freedom to rewrite work rules to lower wages and eliminate benefits will realize that our collective voices cannot be silenced.
Posted by irudedog at 06:01 No comments: