By Mary Jane Credeur - Apr 26, 2013 1:25 PM PT
United Parcel Service Inc. (UPS) and the Teamsters union agreed to a new five-year contract covering 250,000 employees, erasing the risk that some business might be lost through just the threat of a strike.
The accord includes “substantial” pay raises, higher wages for new part-time employees and the creation of 2,000 more full-time jobs from the ranks of part-timers, the union said yesterday. The agreement will go to a ratification vote among rank-and-file drivers, package sorters and clerks before taking effect on Aug. 1.
Reaching the accord before the existing contract expires in July offers reassurance to shippers who may have begun shifting deliveries to FedEx Corp. (FDX) or other competitors ahead of a possible walkout at the world’s largest package-delivery company. A two-week Teamsters strike in 1997 cut Atlanta-based UPS’s volumes as much as 6 percent and cost about $650 million.
The contract “removes an overhang on UPS shares,” Justin Yagerman, an analyst at Deutsche Bank in New York, wrote today in a note to clients.
UPS management probably included the higher wages in its full-year earnings forecast of $4.80 to $5.06 a share, which the company reaffirmed yesterday when it reported first-quarter results, said Yagerman, who recommends buying the stock.
UPS climbed 0.3 percent to $85.71 today in New York trading. The shares previously gained 16 percent this year, compared with 11 percent for the Standard & Poor’s 500 Index.

The contract preserves health-care benefits and boosts pension contributions, making it a win for UPS Teamsters “at a time when workers and their pay, benefits and working conditions are under attack by corporate America,” Teamsters General President Jim Hoffa said in a statement.
Union employees sought higher pay, more full-time jobs, an increase in part-timers’ starting salaries and no co-pays on health-care premiums, according to the Teamsters for a Democratic Union, a splinter group of Teamsters workers.
UPS management wanted the union to share part of the burden of rising medical costs and had a goal of completing a contract by the end of March to avoid losing business, Scott Group and Ed Wolfe, analysts at Wolfe Trahan & Co. in New York, wrote in a March 22 note. Wolfe Trahan rates UPS as peer perform.
“These agreements are a ‘win-win-win’ for our people, customers and shareholders,” UPS Chief Executive Officer Scott Davis said in a statement. “The fact that we have reached agreements well before our current contracts expire is a testament to the skills and determination of all those involved in these negotiations.”
Talks began last year, and Davis said yesterday on an earnings conference call with analysts that he was optimistic a deal would be made “very soon.” UPS’s last tentative agreement with the Teamsters was reached 10 months before the previous contract expired.
To contact the reporter on this story: Mary Jane Credeur in Atlanta at mcredeur@bloomberg.net.
To contact the editor responsible for this story: Ed Dufner at edufner@bloomberg.net

Posted by irudedog at 17:35 No comments:

FedEx is retaining the contract that was set to expire in September. The shipping giant was thought to be at risk of losing the lucrative deal, possibly to rival UPS.

Instead, FedEx will keep the air cargo deal for another seven years. The Postal Service said FedEx faced competitive process in order to retain the contract.

"Following a rigorous evaluation of technical aspects, pricing, and other factors in the proposals, the Postal Service determined that the FedEx proposal represented the best value," the agency said in a statement.

The new deal allows for service improvements, capacity flexibility and other operational enhancements, the Postal Service said. The agency is revamping its own network--including consolidating hundreds of mail processing facilities--in order to respond to plumenting letter volumes but a growing package delivery business.

Posted by irudedog at 21:24 No comments:

How the relationship between employers and workers changed

CEO Pay and You

enter FedEx Corp in the search box to get information

Posted by irudedog at 21:03 No comments:

Frequently Asked Questions About the Union

Here is a flyer that you can print and hand out to your fellow employees. Remember only handout during lunches and off the clock. 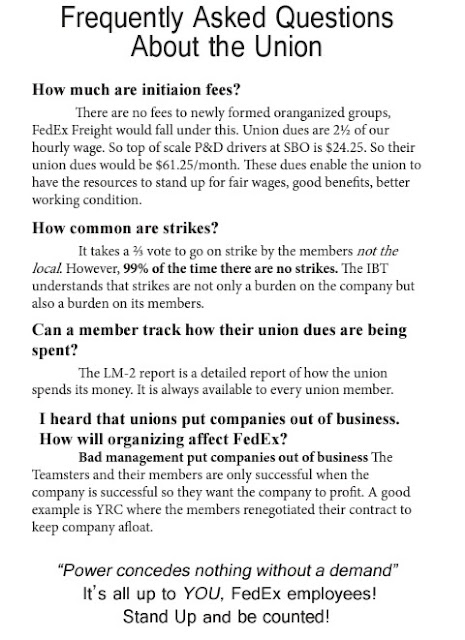 Posted by irudedog at 06:07 No comments: