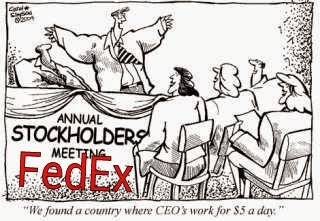 Posted by irudedog at 10:57 No comments:

in our morning meeting on Wednesday in SBO. We were told that our wage increase will be moved from our fiscal year in June to October of this year. to coincide with the rest of the operations FedEx Freight.

there will be retroactive pay from July to the new pay date in October of 1/3 of the increase. if there is an increase in October per our managers.

Posted by irudedog at 19:41 No comments:

What Happened to Safety First?

I received a call from a driver who was concerned about a liftgate delivery of a shipment weighing 6000lbs. He contacted management about this delivery and not once did the manager say ' if it's not safe to deliver find another way', but instead said, ' make sure to charge for the liftgate'?

Is this the real meaning of 'People First' ?

Posted by irudedog at 12:40 No comments:

The City of New York had sued FedEx last December, accusing the company of creating a "public nuisance" through its partnership with Shinnecock Smoke Shop to ship untaxed cigarettes to homes.

An amended complaint filed on Sunday included the State of New York Attorney General Eric Schneiderman among the plaintiffs, and sought more than $239 million in damages and penalties.

The New York state alleged that FedEx knowingly shipped nearly 400,000 cartons of unstamped cigarettes to homes in the state, depriving it of $15, $27.50 or $43.50 on each carton in tax revenue.

The New York city had earlier alleged that the company deprived it of excise tax of $15 per carton.

"The claims advanced in the Amended Complaint by the NYAG are substantively identical to the City's claims in the original Complaint," Assistant Corporation Counsel Eric Proshansky, who represents the New York City in the case, said in a letter on Sunday.

"Accordingly, the proposed objections to the pleadings raised by FXG (FedEx Ground Package) should still form the basis for discussion at the April 9th pre-motion conference."

Schneiderman's office and FedEx were not immediately available for comment outside regular business hours.

(Reporting by Supriya Kurane in Bangalore; Editing by Joyjeet Das) 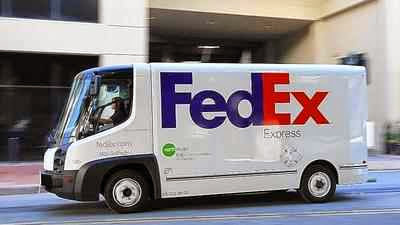 Posted by irudedog at 18:49 No comments:

And You Call This F-ing Leadership? by Steven H. Newhouse

FedEx Freight’s bungled $780 million acquisition of the assets of Watkins Motor Lines as related by Steven H. Newhouse, a company officer who lived through it, is a unique case study on leadership that chronicles the calamitous demise of the company that became FedEx National LTL. This narrative provides many pertinent examples of and valuable insights into leadership and relevant perspectives on the importance of valuing workplace cultures. Newhouse shares a poignant story of how not to lead in juxtaposition to the insights of a successful leader who understands the importance of valuing workplace cultures. What happened to the Watkins Motor Lines workforce once it became FedEx National LTL should never have happened, but it did due to a combination of inadequate leadership and a bad economy. This is the story of how a journey down a highway that began with high hopes and aspirations became littered with broken promises, countless disappointments and a final disastrous end: the demise of a 74-year-old highly successful and profitable nationwide trucking company that employed 10,000 employees and had over $1 billion in revenue the year it was acquired by FedEx. Steve Newhouse is a retired vice president and managing director of Human Resources from FedEx National LTL and FedEx Freight Corporation. After obtaining his BBA and MBA from Western Michigan University, he spent 43 years in Human Resources management with seven different corporations after serving as an Adjutant and Personnel Officer for an Air Defense Artillery Battalion in the US Army. He spent 24 of those years as a vice president of Human Resources at four different corporations. This case study will provide you with a meaningful perspective and deeper understanding of what it means to be an effective leader to your workforce and what it takes to become the leader for whom you yourself would want to work. Editorial Reviews About the Author

Steven H. Newhouse is a retired vice president and managing director of Human Resources from FedEx National LTL and FedEx Freight Corporation. After obtaining his BBA and MBA from Western Michigan University, he spent 43 years in Human Resources management with seven different corporations after serving as an Adjutant and Personnel Officer for an Air Defense Artillery Battalion in the US Army. He spent 24 of those years as a vice president of Human Resources at four different corporations. During his career, Steve was a board member and board chair of CUE, Inc. an organization devoted to positive employee relations, San Antonio, TX; a board member and board chair of the North American Transportation Employee Relations Association, Washington, DC; a cofounder of “Freewheelers”, an organization comprised of 20+ national trucking companies who meet regularly to discuss common Human Resources practices and industry workforce issues; a board member of the Blue Ridge Conference on Leadership, Auburn University, AL; a board member of the United Way of Central Florida, Lakeland, FL; and a board member and board chair of the American Red Cross, Polk County Chapter, Winter Haven, FL. Steve currently serves on the board of the Watercolor Society of North Carolina where he is responsible for long range planning for the society. 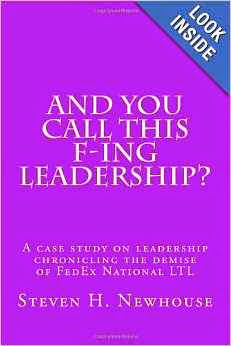 Posted by irudedog at 18:09 No comments:

Pacific 9 Transportation (Pac 9) agreed today that its port truck drivers are employees and have the right to join a union, according to a settlement reached with the Teamsters today. The settlement is part of a series of state and federal actions that strengthened the hand of truck drivers who want union representation at the Port of LA/Long Beach, according to the Los Angeles Times.

The settlement follows a finding by the National Labor Relations Board that Pac 9 drivers have been misclassified as “independent contractors” under the National Labor Relations Act (NLRA). Further, the NLRB’s Region 21 found that drivers have been subjected to unlawful retaliation for exercising their legal rights to organize a union. (Read the settlement here.)

According to the Los Angles Times,

The agreement comes after repeated victories at the state Labor Commissioner’s office, where 30 drivers have won decisions against 11 port trucking firms, awarding them $3.6 million in wages and penalties.

I am ecstatic. They dug into this situation and found there is a serious problem here. We are trying to protect jobs and workers who are being mistreated.

The ruling from the NLRB regional office could affect the entire port trucking industry, which currently leaves many of America’s port drivers working full time yet earning less than minimum wage.

According to HDT Trucking Info,

...the settlement does not include Pacific 9 Transportation admitting to any wrongdoing.

Pacific 9 drivers have filed more than 50 wage and hour claims with the California Labor Commissioner and went on strike in November 2013 in protest of unfair labor practices. They were joined in a 36-hour protest by drivers of Green Fleet Systems and American Logistics International, also located in Carson, just north of Long Beach.

Pac 9’s business practices have also attracted the attention of the Tax Division of the California Employment Development Department for misclassifying drivers and failing to pay unemployment and workers compensation taxes, according to the group.

Now that the government has validated what I’ve always known – that I am misclassified as an independent contractor – I have the rights of an employee and can fight for better conditions at work and a better future for my family through a Teamster contract.

Pac 9 owns the trucks driven by the drivers, but forces them to pay for fuel, tires and maintenance. Because the company misclassified them as independent contractors, they didn't receive benefits or enjoy legal protections as employees.

Posted by irudedog at 06:49 No comments: Posted by irudedog at 06:40 No comments: