FedEx’s effort to keep FedEx Express’ ground transportation employees under the RLA is not– as the FedEx website would have it – a battle between rival package-delivery companies, specifically, FedEx Express and UPS. It is rather a battle between FedEx Express and its own employees, who seek the same opportunity to be represented by a union as counterpart employees at other package-delivery companies. In this regard, the actions taken by FedEx are just the latest in a long history of vigorous resistance to efforts by its employees to unionize:

• As early as 1983, a FedEx booklet titled “Managers Labor Law Book” credits the company’s success in large part to being “union free.” 66 On the second page, the booklet declares that the corporate goal is to remain “union free;”

• In 1989, shortly before acquiring Tiger International Airline, many of whose pilots were union members, FedEx’s founder and chief executive officer, Fred Smith, declared: “I don’t intend to recognize any unions at Federal Express;” 67

• In 1993, FedEx distributed to its managers a booklet produced by the company’s legal department titled “Keeping the People Philosophy Alive: Making Unions Unnecessary.” The cover letter said, “Enclosed you will find a new guide designed to provide Federal Express managers with basic information about union avoidance and union organizing;” 68 and

The Leadership Conference recognizes the right of an employer, including FedEx, to resist unionization by its employees – provided that in doing so, the employer respects the rights of the employees and complies with its own legal obligations. But that has not always been the case with FedEx.

In 1991, for example, the National Mediation Board found that FedEx Express illegally interfered with the representation election for the company’s pilots. 70 In another election, the pilots voted for union representation, becoming the only group of FedEx Express’ employees to unionize. 71

In 2007, The Leadership Conference issued a report titled “Fed Up with FedEx: How FedEx Ground Tramples Workers Rights and Civil Rights,” which documents how another division of FedEx, FedEx Ground – a shipping company that relies entirely on trucks rather than airplanes, and whose employees are covered by the NLRA – misclassifies approximately 15,000 of its truck drivers as “independent contractors.” 72 This misclassification excludes these employees from the coverage of labor, employment, and civil rights laws, including the NLRA, and among other things, denies them the right to form and join unions. Although several courts, federal agencies, and state officials have ruled that these FedEx Ground truck drivers are employees – as one court put it, FedEx Ground’s agreement with its drivers is “a brilliantly drafted contract creating the constraints of an employment relationship …. in the guise of an independent contractor model” 73 – FedEx Ground continues to adhere to this policy in most of the nation.

The tactics used by FedEx in its campaign to keep FedEx Express’ ground transportation employees under the RLA – while aggressive and disingenuous – have not to date been unlawful. But the statement made by Sen. Kennedy in the 1996 Congressional debate to restore the special exception for FedEx Express is as apt today as it was then:

Federal Express is notorious for its anti-union ideology, but there is no justification for Congress becoming an accomplice in its union-busting

Email ThisBlogThis!Share to TwitterShare to FacebookShare to Pinterest
Posted by irudedog at 19:42 No comments:

SBO received D- on their employee survey. management had meetings yesterday morning. asking us what was wrong.

if they only look outside their window to their yard and see this. their answers are in front of their noses 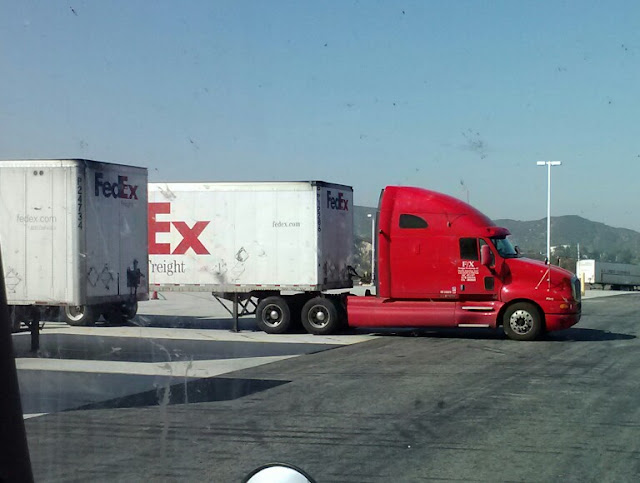 It is that time of the year when FedEx shows us just how much we are worth to them. It was recently announced that the top of scale drivers will be receiving a 1.8% raise. This 43 cent raise will put our hourly wage at $24.93.

Now this is great news until you take a look at the raises that our brothers at UPS will be voting on. Their current hourly wage is $25.70 and their potential contract will assure wage increases for the next 5 years, this is in addition to a 1.95% raise this July that their old contract provided. So let's break down what that is going to look like for them:

In addition to our measly (though appreciated) raise, my health insurance (Anthem) costs have also gotten a raise. My deductible for my family of 3 has gone from $900 to $1500. My monthly medical benefit deductions have also gone up to about $295 a month.

So all in all, our little raise obviously leaves us better off than we were before this raise but it still falls short on putting more money in our pockets and keeps us with our heads only barely above the water.