Fred Smith to step down from president role at FedEx

×
WMCTV : Fred Smith to step down from president role at FedEx
m.wmctv.com
VIEW
61°

Starting January 2018, FedEx Express CEO David Bronczek will take over the role of president of FedEx Corporation. FedEx also created a new position, Chief Operating Officer, in what business experts say could hint at a succession plan, according to Bloomberg Technology.

Smith is 72 years old. He founded FedEx in 1971 in Memphis. His possible retirement has been subject of much speculation for years. His ultimate plans are still unknown.

Additionally, FedEx announced that Executive Vice President of Market Development and Corporate Communications T. Michael Glenn will retire at the end of 2016.

"Mike Glenn is a thirty-five year veteran of FedEx, and without a doubt the most brilliant marketer I have ever met. His passionate leadership, strategic vision, and intellect have transformed the FedEx portfolio and brand and immeasurably improved global commerce," FedEx Corp. chairman, president and CEO Frederick Smith said. "While this is a tremendous loss for FedEx, I commend and admire Mike for this decision as he transitions his focus full time to his family."

Posted by irudedog at 21:45 No comments:

12 hrs ·
Here are representatives of our 4 Union Terminals. That came today to Memphis Tenn. at FedEx World Headquarters for the annual shareholder meeting to ask Fred Smith questions you have never had the opportunity to ask except at your local level.

Posted by irudedog at 21:29 No comments:

September 23 at 5:13am ·
FEDEX PPA (PENSION PLAN)
Fedex has been pushing for 2 years now on how bad of shape central state pension fund was in. That part true, what they fail to tell is why and how.
Well here is a quick snap shot of the fedex plan. So why is our plan $5.3 billion short. Why are we paying out more than we take in. There is nobody in freight running to the gate to retire anytime soon. This plan has only been around for a few years so no one has enough time in it to retire, so where is it going.
Wall st. And Goldman Sachs killed central states pension fund WHO IS KILLING OURS? Freddie gets $25mil. In retirement and another guy gets $19Mil. SMH. They are beating us down with our healthcare and the pension fund and all of you are ok with this SMH.
Know this Freddie can do what ever he wants with this. What Freddie says goes.

Posted by irudedog at 14:03 No comments:

It's that special time of the year where FedEx shows us how much we really mean to them. I recently received my annual Pension Statement and unsurprisingly, it is a complete disappointment.

After 14 years at FedEx, my monthly pension will be a measly $178.37 a month. To put that in perspective, my Viking pension (which was the company I worked at for 15 years before they were taken over by FedEx) will $ 648.58 a month. Now, keep in mind that my Viking pension was frozen once FedEx took over so it hasn't grown since then.

How is it possible that a small business like Viking could afford that kind of pension but a corporate giant like FedEx can't even give me enough to cover my grocery budget?

FedEx boasts that they "strive to develop mutually rewarding relationships" with their employees. What is mutually beneficial about us working hard to make this company profitable while they refuse to fairly compensate us?

Here Is The Way Our FedEx Pilot's Pensions are Calculated 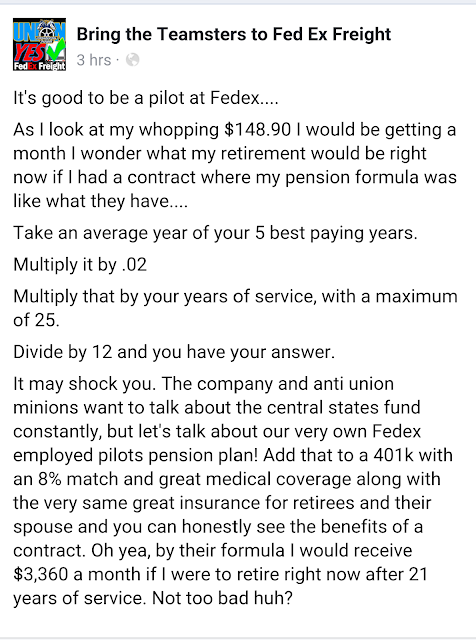 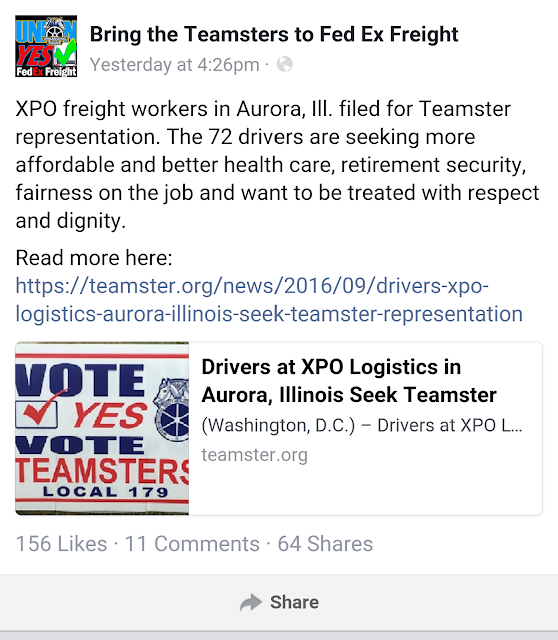 Posted by irudedog at 21:57 No comments: 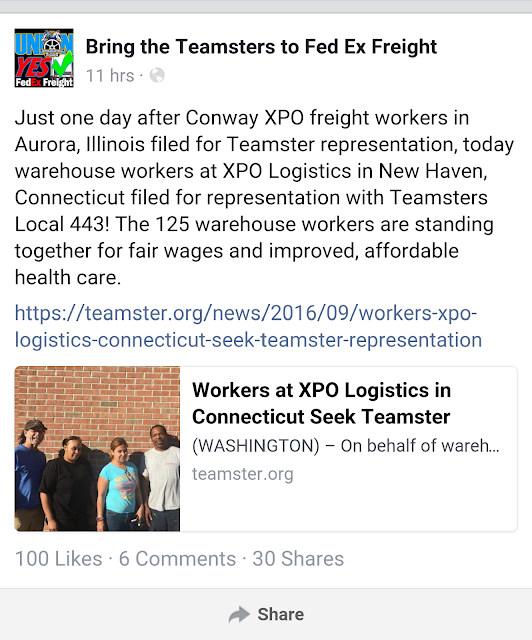 Posted by irudedog at 21:56 No comments:

Letter to Investors Urges “No Vote” Due to Critical and Persistent Weaknesses in the Company’s Pay Practices
PRESS CONTACT
Kara Deniz
Email: kdeniz@teamster.org
Phone: (202) 624-6911
(MEMPHIS, Tenn.) –Today, the International Brotherhood of Teamsters mailed a letter to FedEx Corp. (NYSE: FDX) shareholders urging a vote against the board’s “Say on Pay” proposal at the September 26, 2016 annual shareholder meeting.
The letter challenges FedEx’s reliance on a two-decade old approach to long-term pay, arguing that it is overly generous and ill-equipped to delivering long-term value in the current environment.
In the letter, Teamsters General Secretary-Treasurer Ken Hall details how FedEx executives benefit from lowballed earnings-per-share (EPS) growth targets that have remained unchanged for over two decades. This is even as analysts routinely project higher EPS growth for FedEx and investors increasingly question whether earning-per-share is an appropriate measure, particularly in capital intensive industries such as freight.
“It is ludicrous to think that an effective compensation plan can be operating under the same performance assumptions as two decades ago,” Hall said. “That’s an eternity in the worlds of both executive pay and freight. This Compensation Committee appears to have put its core responsibilities on autopilot.”
The letter also criticizes the FedEx Board’s Compensation Committee for increasingly aggressive adjustment of earnings measures used in its pay plans. Over the past two years, half a billion dollars of legal costs incurred from the company’s operational and employment practices at FedEx Ground have been excluded in the calculation of incentive payouts.
“If the long-term incentive plan is to support long-term value, it follows that it should fully internalize expenses associated with the operational and strategic decisions of the current management team,” Hall said.

Over the past three years, CEO Fred Smith has received nearly $45 million in compensation, more than 300 times that of the median FedEx employee, based on salary data from PayScale, Inc.
The International Brotherhood of Teamsters represents 1.4 million hardworking men and women throughout the United States, Canada and Puerto Rico. For more information, please visit www.teamster.org. Follow us on Twitter @Teamsters and “like” us on Facebook at www.facebook.com/teamsters.

Posted by irudedog at 06:51 No comments:

Posted by irudedog at 08:03 No comments: