PT Driver Rolling Down I-15 with a LTL National Trailer 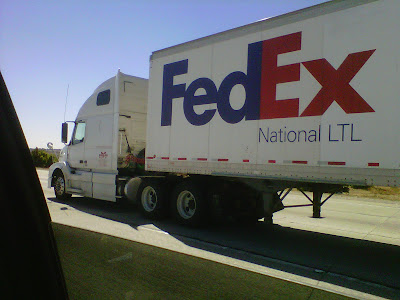 No division of FedEx Freight are safe from being " outsourced"

Maybe they just use the Purchase Transportation for the line work, and they have the FedEx employees do the city work?

That is what I'm thinking also. Yesterday I got a call from New Mexico from one of my organizers in that area and he said he counted 27 trailers being pulled by PT drivers also. Not just LTL trailers but in combination with Freight trailers!

It will be just a matter of time if this company can find a way to get rid of local drivers or make them like FedEx Ground driver, contracted with no benefits! Which is ironic they would give you a contract that way, but will lie and bs you, when you tell them you want the Teamsters to represent you with a Teamster Contract!

Oh well, until all of you stand up to all the bs the company is saying about the Teamsters. Who knows, maybe a PT driver will be doing your job next.

A Government for the People, Not for Fred Smith
By Teamsters General President Jim Hoffa
Published By The Detroit News on August 11, 2010

In the U.S. free enterprise system, corporations are not supposed to use the government as a weapon to punish their competitors. They certainly aren’t supposed to manipulate federal law so they’re treated differently than every other company in America.

And yet that is exactly what FedEx CEO Fred Smith has been getting away with for 14 years.

In 1996, Smith successfully lobbied for a special exception to a 73-year-old law regulating railway express companies. It’s a legal loophole that gives FedEx an advantage over all of its competitors. The loophole allows FedEx Express to make it almost impossible for its drivers to organize a union, a privilege denied every other large, medium and small package delivery company in America.

The House of Representatives recognizes that Fred Smith’s special exception is not only unfair but contrary to free-market principles. This year, House members voted to take out the loophole. That would restore the law to the way it was when first enacted in 1923.

The House vote was part of a bill authorizing the Federal Aviation Administration’s budget.

In the last three months, Smith spent $7 million to block the FAA budget.

That bill has moved to the Senate, where Fred Smith’s friends from Tennessee are standing in its way. Republicans Lamar Alexander and Bob Corker are thus holding up improvements in air safety, modernization of the air traffic control system and expansion of airports.

Of course Fred Smith doesn’t want people to know how he’s gaming the system. So he’s running a campaign to mislead the American public. You may have seen his “brown bailout” campaign, which accuses his rival, UPS, of asking for special treatment from Congress.

In other words, Smith spent $7 million in three months to preserve a special favor from the government. FedEx employees would prefer that the company spend some of that money on restoring their pensions and improving health care benefits.

Smith’s multi-million-dollar misinformation campaign relies on the fact that most Americans don’t pay close attention to the small details of big spending bills.

News reports 14 years ago tell the real story. According to the New York Times on Oct. 12, 1996, Smith has “one of the most formidable and successful corporate lobbies in the capital.”

FedEx’s lobbying campaign includes “A generous political action committee, the presence of popular former Congressional leaders from both parties on its board, lavish spending on lobbying, and a fleet of corporate jets that ferry dozens of officeholders to political events around the country,” according to the Times article, titled “Federal Express Knows Its Way Around Capital.”

It’s too bad that Sens. Corker and Alexander are enabling one obsessed rich man to control Congress for his own selfish ends.