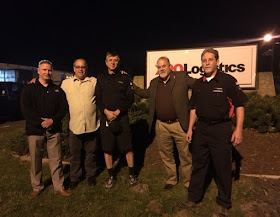 XPO drivers in Trenton, New Jersey voted to join Teamsters Local 701 on Friday, April 14, boosting momentum to a nationwide workers' campaign for fairness at the giant transportation and logistics company.
Also voting on Friday, April 14, drivers in Elgin, Illinois and dockworkers in Aurora, Illinois were not successful at this time seeking Teamster representation. The actions of XPO and its high-priced union busters has been egregious and suspect throughout the company's campaigns and will be challenged through the National Labor Relations Board.
The 34 drivers in Trenton join the hundreds of workers nationwide who have already formed their union as Teamsters. The earlier victories were in Aurora (drivers); Miami; Laredo, Texas; Vernon, Calif.; North Haven, Conn.; and King of Prussia, Pa.
"The victory in Trenton and the company's desperate actions in Illinois show that the XPO workers' campaign is getting stronger and stronger, as freight, warehouse and port drivers fight for a more secure future," said Ernie Soehl, Director of the Teamsters National Freight Division, who is also President of Local 701 in North Brunswick, New Jersey. "The workers help make XPO very successful and they deserve to be rewarded for their hard work."
The drivers are seeking decent and affordable health insurance, a secure retirement, job security and a voice on the job. Port, freight and warehouse workers at XPO are coming together across the country in their fight for a more secure future.
Posted by irudedog at 07:49