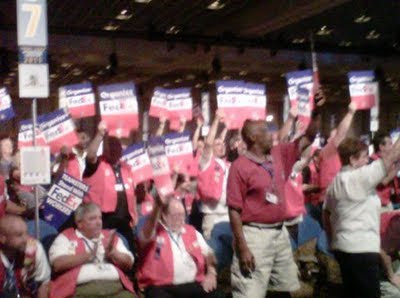 There have been anti union meetings so far in Gardena, Bandini and Whitier terminals lately. No surprises since the Teamsters have announced, at their Convention last month, that there will be a campaign to organize FedEx Freight now.

So the usual rap from managers, who are the tools of well paid union busters that hide behind the managers who could be the ones who are charged with unfair labor charges instead of the busters!

They say that the Teamsters will come to your house and make you sign a "union card". I have had a visit from them and not once during their visit did they ask me to sign a card! Did you hear that Whittier, Bandini, and you managers at Gardena!?

"All they want is your money" I personally have no problem with that. That will give me representation, which Joe Nuno didn't have, in case FedEx or a manager is trying to get rid of you for his own personal reasons, you got that Mira Loma? Besides, union dues are tax deductible!

So the next time management says their entire BS about the Teamsters, ask them to put all the things they are saying down on paper and sign it! If they're so sure of it, they shouldn't have a problem doing that for you.

Beside management and the rest of the tools say, "educate yourselves about the union" right? So if a Teamster and a committee member come knocking at your door let them in and "educate yourselves" and ask as many question that you like! If you ask a lot of questions at work, management will tell you, "not now later", see me in my office. Watch out, you might be considered “disengaged!”

A bunch of the union busters in Brockton, MA suddenly left last week.

It's probably the same ones.

the most important benefit of being UNION is the GRIEVANCE PROCEDURE, IT IS THE BASIS OF EVERY ASPECT OF YOUR WORKING LIFE, JOB SECURITY,WAGES,AND MOST IMPORTANT RESPECT.

I seen some guys in suits talking with Andy Lessin the other day in WHT. So Andy will probably be stratagizing again against the workers. Here we go again with the same old Lessin bullshit song and dance. I have to remain anonymous cause I know how Andy harasses people who come on this website and then Andy corners them at work and talks his bullshit to them. Wanted to let you guys know Joe and Rudy along with the other hard working hourly employees at Whittier cause we all know supervisors are like diapers around here always on our ass and full of shit.

There will not be a meeting this Sunday 8-14-11. Next meeting will posted when a date and time is announced.

We are having meetings at our Service Center where they tell what we are to do when we are at home. What's up with that? I don't think we will be getting paid anything extra for the home work by FedEx. Strange!

The union can come to my home anytime they like and I will invite them in as long as they are respectful of my home and family. I have had enough of fedex's bullsh#t for long enough.