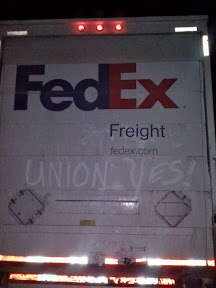 FedEx Freight definitely needs to be unionized. Over at the Whittier terminal you have supervisors treating dock workers and drivers like crap. I see it happening. Management are bullies who hide behind their red shirts. They would bully nobody if a union was implemented.

FedEx Freight definitely needs to be unionized. Whittier management treats dock workers and drivers like crap. I see it happening all the time. They are nothing but bullies hiding behind red shirts. They wouldn't bully anyone if a union was implemented.

Fedex employees are bunch of pussies(except for me and a few others of course)..they would rather live on their knees,than die standing up.I just don't understand how they would alow themselves to be treated like this.

Fyi it is easier than you think to get rid of a red shirt. Their guidelines and policies for employment are a lot different then an hourly employee. They cannot fire you or give you a coaching or even harass you if you are doing the job correctly, and safely. The biggest problem with red shirts isn't what the company teaches them, but what they never learned in the first place. Most red shirts are young, in age in the company. And they lack experience and knowledge to lead. Most red shirts are just big headed teens still growing up. Union or not, no one should stand for ignorance by a red shirt or anyone one else. So to everyone that thinks a union will stop ignorance, you better take a look around, ignorance only stops when you, yourself, put an end to it by knowledge. Knowledge to know what is right and what is wrong. You can't mess up freight, or b.s. and depart late, and then say management is being harassing or mean. It's that old teacher/student syndrome that we need to get away from. So freshen up on your reading skills, empower yourself with the knowledge and policies and fight back with the right means. No matter if you want the union or not, The only person that will make a difference and change this company or any other is ourselves. You want a union for a contract, or for someone else to stand up for you, go ahead. But don't think for a minute that ignorance will stop when a union comes in. That's the wrong reason to think we need a union in fedex. Thanks, sbo driver