Today, in the City of Opportunity, our courageous brothers and sisters have taken a step toward a brighter future by  striking for the right to vote for Teamster representation. The decision to strike follows the successful Stockton campaign as well as other triumphant campaigns across the nation.
The journey to this point has been a long one. Over the years, we have faced the deceptive anti-union tactics of FedEx Freight including harassment, wrongful termination and the blatant spread of misinformation. But despite their best efforts, we have stood strong in our fight to bring the Teamsters to FedEx because we know that a union contract is our only opportunity for a better future.
The choice to strike is a difficult one, but nothing worth having has ever been easy. Today and for however long it may take, we stand with our brothers and sisters in Gardena.

Stay strong and fight on!

-The Change FedEx to Win Team 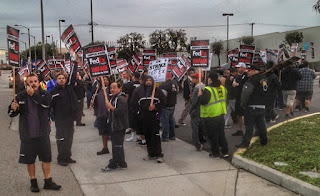 Good for you guys may God help your cause and don't Let Fred try and nickle and dime you.Be smart. That guy should be paying for everything including Pension all company covered.

To Russ Fleck and Farrin Harris
Do you remember that challenge in Farrin office in 2007 Russ?
You told me to stop this ridiculous Union organizing, that Fred Smith was not going to allow this Union to step in, that I would never have a glitch, that it would be impossible to organize at least one yard.
And I've told you I'll take that challenge, that anything is possible, that it would be a slow process but it could be managed with proper education.
Last words from you was, OK is your choice but be careful and you weren't responsible if any damage was done to my car because of my Union Yes sign.
Well is been 7 years now and manage to organize 4 yards so far, Thanks to the Brothers and Sisters of the Teamsters it has successfully succeeded well and more to come, you seen or heard about Gardena yard, that a stoppage can happen now and later on.
Well Russ, we'll see what's in line next, take care...and by the way, tell Mark Link Thanks for firing me, it was the best thing he did, releasing me was my freedom to attain more effort to this Organize Drive.
Sincerely Joe Nuño Teamsters local 848

Beautiful day out in Utah, blue skies and very chilly
Drivers are thrilled to be part of the Teamsters too !
Just a matter of education in understanding why having
A Collective bargaining agreement is important.
Seems that drivers out here are fedup of the rules that
Changes every day, making them feel like they are walking
On eggshells.
But the problem is, drivers feared for their jobs, that if
FedEx gets winds of them involving themselves in any
Union activities, FedEx might retaliate on them.