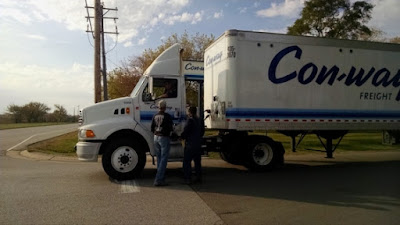 Con-way Freight, Inc. violated the rights of workers who were trying to form their union with the Teamsters and must re-hire two workers it unlawfully fired during the organizing campaign, among other remedies, an administrative law judge with the National Labor Relations Board (NLRB) has ruled.
“By instructing employees not to wear union insignia, threatening employees for supporting the Union, filing criminal charges against an employee, suspending employees, and terminating employees because they supported the Union, the Respondent has engaged in unfair labor practices…,” Administrative Judge Eleanor Laws wrote in her decision.
The workers at Con-way’s Los Angeles terminal were trying to join Local 63. The company must cease its illegal activities, reinstate the two fired workers and pay them back wages and benefits, and take other steps.
To read the decision, click here.


Bottom line, these two brothers didn't do a damn thing wrong, but only try to form a union.
And what did Conway do, retaliated on them for exercising their rights to form a union.
This two brothers stood for their Rights to better the work conditions, to stop the abusiveness of cruel management.
To also improve the fringe benefits, by lowering medical benefit or having free medical paid by corporate...remember you're the backbone of the company's growth and it's fair that Conway/XPO pay for your health insurance so you can continue growing the company.
What else they were trying to improve? Your pension plan, we all deserve to retire with a decent pension so we can live comfortably on a steady check, the American Dream of living our golden years without worries.
And last is a collective bargaining agreement, not a lousy company policy book that will eventually change for the company own gain, get away from being an at will employee, become a Just Cause employee.
Congratulations brothers on fighting the unfair labor practice that Conway cause you to lose your hard earned years, and now you're aligned back to place.