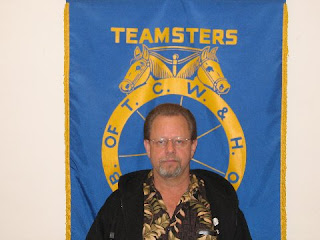 Cliff is a future Teamster. He is an organizer with the Fedex Teamsters in Fontana Service Center driving Pick Up and Delivery. He is 54 years old and he has 30 years of service with Fedex Freight/Viking Freight.
Q: To the best of your knowledge how much will you receive when you retire?
A: I will receive $1100 per month with my Fedex pension. With social security I will receive $1300 per month. So a total of $2400 dollars per month. You know after 30 years of service the Fedex Pension plan stops growing for me. This simply means I won't get one penny more after 30 years with the Fedex pension, but with a teamsters Pension I will keep growing my pension until I retire. Plus I won't have any medical insurance to speak of with fedex's pension, but the Teamsters have retiree medical something fedex is too cheap to give to their employees. I guess fedex just doesn't care when the employees retire if the employees have medical insurance or not.
Q: How comfortable are you with your retirement plan from Fedex?
A: I'm not comfortable with the Fedex pension at all. New pension or old pension is all the same. A complete fantasy. There is no medical plan to fall back on. I don't know what I'll do for medical insurance when I retire. It's going to be hard for me to live on that 1100 dollar a month pension Fedex is going to give me.
Q: What do you think about the NEW revamped pension plan Fedex is putting out there now that people are unionizing?
A: With the new pension plan, with my age and years of service I think this new plan stinks. The Fedex management is trying to simulate the Teamsters pension in a much cheaper version which will hurt employees in the long run. It's similar to the Teamsters golden 80's which combines years with length of service. I will get 36,000 dollars from this pension plan that's it. This amount with the new Fedex pension plan will be drawn off of the Treasury Rate. Let's say an employee, for sake of the conversation we will call the person Bugsy, would get 50,000 dollars after ten years of service. So say Bugsy works 20 years and gets 100,000 dollars. Bugsy then after taxes on that money which is drawn in a lump sum gets 75,000 dollars. This 75,000 dollars will only last Bugsy for 1 or 2 years tops. This is a weak retirement. Both Fedex pensions are pathetic and I feel the new pension plan is even more pathetic than the old one. The Fedex Corporation stresses a 401k plan, but the 401k plan goes up and down like a yo-yo. So you have to ask yourself is this plan secure for you and your future? Or are you going to rely on a yo-yo for your retirement? Is the 401k going to be up or down?
Q: What do you think of the so-called retirement estimator being passed around by the management at Fedex Freight?
A: I think it is like Disneyland. The retirement estimator is something out of fantasy land. It is pure nonsense. It is like setting up your retirement using a crystal ball. I have worked for fedex freight/Viking for 30 tough years and I feel very insulted by this retirement estimator. Everything about the old pension was a secret for the last 30 years, but now since there is a mass interest in unionizing the company is scared a union will come in. I feel as if the pension plan should have now and always have been public information for all employees to look at anytime they want to. I don't understand all of the secrecy and lies from the management.
Q: What would be a direct impact of unionizing Fedex Freight?
A: With a union the benefits package would be included in the union dues which means we as employees would pay less in benefits per month. The dues are 2 and a half times what we make per hour. With Fedex you have Fred Smith and a lot of corporate greed going on with the employees having to bear the brunt of paying more for health insurance, a terrible pension plan, and a fantastical retirement scheme involving a 401k. What a scam. The Fedex management is just taking more and more advantage of the employees trying to get a lot paying for very little.
Q: Do you think a Union would be good or bad for Fedex Freight?
A: I think that the Teamsters Union would be great for Fedex Freight. We will have an enhanced medical plan with little to no co-pay for medical visits and prescriptions. I will have a good retirement and favoritism till soon be eliminated with a union. If the company continues to try and cut my overtime the union will step in and demand that my seniority be respected. It is about respect. Also, I will have good backup if the company tries to write me up for no good reason. This is called a grievance procedure not a sham that is done now with a gestapo type management berating employees.
Q: What kind of future do you see for the Fedex Teamsters unionizing Fedex Freight?
A: I think the Fedex Teamsters have a very positive future. I see a binding Teamsters Union contract in our future. No more empty company promises. Fedex Freight employees will make more money per hour with better benefits, but the company will also have a lower turnover rate saving money and keeping employees working. Fedex Freight tells us we have the best company, but Fedex doesn't pay us or treat us like the best. You have to ask yourself,"What's wrong with this picture?"