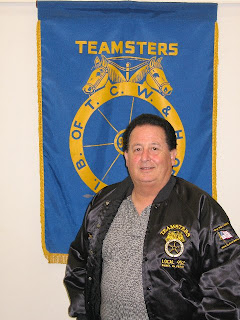 Fedex Teamster Chronicles Interview with Frank Pineira
Recently Fedex Teamster Chronicles got a chance to sit down with Frank Pineira to talk with about his retirement:
Q: To the best of your knowledge how much will you receive when you retire?
A: When I retire after 33 years of being a proud Teamster I will receive 4100 dollars per month.
Q: Is that 4100 dollars per month include your Teamster Pension, 401k, and social security?
A: No, that 4100 dollars per month is just my Teamsters Pension. If I include my 401k and social security with my pension then I will receive 6100 dollars per month.
Q: How comfortable are you with your retirement?
A: I am tremendously comfortable with my retirement. God Bless the International Brotherhood of Teamsters for making it happen with the benefits they bargained for over the years. I am grateful for my Teamsters Pension you can't live on just social security and a 401k. The 401k goes up and down at the whim of the stock market. Sure the 401k helps, but you can't make future plans on a hope that the stock market will do well and social security doesn't get privatized. I firmly believe that with a Union contract I have secured my future.
Q: What is your opinion on the International Brotherhood of Teamsters and their impact on the American workforce?
A: If it weren't for the International Brotherhood of Teamsters there would be a super Wal-Mart or a group of companies treating their employees terribly like Fedex. At non-union companies like Fedex there is no Union contract which means no grievance procedure which places hard working employees at the mercy of CEOs who change policy at every whim to suit the company's needs.
Q: Are Unions necessary to obtain a decent retirement package?
A: Absolutely. That's what a Union contract is for. You can't deal with a 401k alone for a retirement plan. I have the Western Conference Teamsters Pension and a 401k. With the International Brotherhood of Teamsters I have the total package. They have blessed my life and they have enriched my future. Fedex has put the money that they would've paid their employees in their own pockets at the expense of hard working employees who deserve retiree medical and the best pension out there the Western Conference Teamsters Pension. I am confident with a Teamsters Pension I will be able to retire comfortably with peace.
Q: Are you confident you will not have to return to work once you retire because of financial hardship?
A: Yes, I am confident I will not have to return to work once I retire because there will be no reason for me to return to work. I have more then a substantial amount of income to live the way I am accustomed to right now. I don't have to spend my time worrying about where the money is going to come from because I am guaranteed the money in my Teamsters Pension. Plus I have retiree medical which was negotiated in the contract by the Teamsters who safeguarded my future. When the Teamsters go to the bargaining table they bring the most important voice to the table. The voice of the workers.
Q: What do you think of Joe Nuno and the various organizing committees organizing fedex thoughout Southern California?
A: I think it is fantastic to see the Fedex Teamsters involved and persistent to change the environment in their workplace. The Fedex Teamsters have a great and devoted following. It takes a lot to stand up to the constant harassment from the Fedex management and gain a voice in the workplace forming a union. There's a right way and a wrong way to live life and I am encouraged to see people fighting for their rights. I am honored to stand with you guys. It is also very encouraging to see Joey Nuno with his father, Joe Nuno. It is very touching to see a father bring up his son with a deep passion for other people's rights putting other people's needs above his own. I am pleased to see the bright future joined between the International Brotherhood of Teamsters and Fedex.