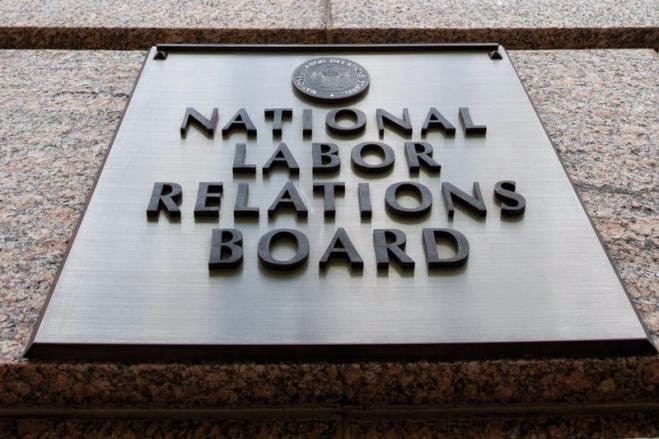 The House vote to slow down the union election process was largely symbolic, but one expert emphasizes that how "easily see how this could be signed into law overnight" under a Republican president. (Wikimedia Commons)
In a show of electoral strength by anti-union Republicans in Congress, the U.S. House of Representatives easily passed legislation Thursday to curb an effort by the National Labor Relations Board (NLRB) to ease procedures for union organizing. Passed by the Senate earlier this month, the measure now heads to the White House, where President Barack Obama has promised a veto.
The NLRB measure passed on a vote of 232-186, with all but three Republicans voting in favor, and all House Democrats voting against. The vote mirrored the partisan divide on labor issues in the Senate, where 53 Republicans voted in favor, with 44 Democrats and just one Republican, Sen. Lisa Murkowski of Alaska, voting against the bill.
Republicans pushed the vote forward as an expression of disapproval of steps by the NLRB to ease worker election procedures in union organizing campaigns at private-sector workplaces. The NLRB had announced last year that it will change its procedures to allow many union elections to take place more quickly, leading opponents to dub the change the “ambush rule,” meaning that labor unions would ambush anti-union employers with quick elections. With the promised veto from Obama, the NLRB rule is currently scheduled to go into effect next month.

AFL-CIO President Richard Trumka issued the following statement in response to the vote:
Today’s vote by House Republicans against the NLRB’s common-sense modernization of its election rules is a direct attack on workers and their right to be heard in the workplace.
Working men and women want an agenda from their Congressional leaders that raises wages and grows our middle class. Instead, they have gotten Republican policies that roll back progress and silence workers while protecting their biggest donors.
President Obama is right in his commitment to vetoing this harmful legislation, and Congressional Republicans should focus their efforts on lifting workers up instead of shutting them out.

The Congressional vote was “mostly symbolic,” says Ross Eisenbrey, a labor expert at the Economic Policy Institute, a Washington, D.C.-based think thank, because Republicans were aware that Obama intends to  veto the bill and anti-labor legislators lack the necessary votes to override the veto.
“It’s a phony issue, really. Obama will veto it, so it won’t have any real effect,” Eisenbrey tells In These Times.
Nevertheless, the vote does signal problems for the future, he says. “Two years from now, if we have a Scott Walker as president, you can easily see how this could be signed into law overnight. In fact, I think any one of the current Republican candidates for president would be likely to sign something like this, or something even worse,” Eisenbrey comments.
Bill Samuel, Director of Government Affairs at AFL-CIO, says pro-labor groups would have needed about 30 Republican votes in the House to defeat the bill. “That’s a tall order in this Congress,” he says.
Instead of 30 Republican votes, just three Republican House members voted on the side of labor unions. They were Rep. Peter King (New York), Chris Smith (New Jersey) and Frank LoBiondo (New Jersey).
According to a report in The Hill, strong support for the ant-union legislation came from the U.S. Chamber of Commerce, the National Association of Manufacturers, the National Retail Federation and the National Federation of Independent Business.
“These are the usual suspects,” Eisenbrey says. “They are happy with a system that allows employers to do whatever they want. They hate to give it up.”

Keep running this information on this legislation. It will be a game changer if passed.